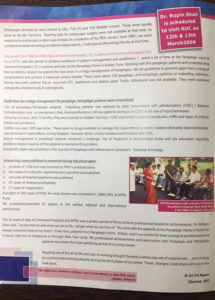 In this issue I would like to share with you, how Urology was in the first phase, when I was a General surgeon.

Approximately 1/3 of the surgical load was Urology, mainly urinary stones and prostatic enlargement. Those were the days of open surgical procedures for stones i.e ureterolithotomy, extended pyelolithotomy, nephrectomy and partial nephrectomy. Large incisions to get adequate access were preferred. A good result aimed at cure, yet the morbidity of large incisions, and prolonged hospitalization was obvious apart from frequent blood transfusions.

Coming to Prostatic Surgery – In the sixties and seventies, open prostatic surgery was decided upon history of obstructive lower urinary tract symptoms and rectal examination. Freyers Transvesical prostatectomy was commonly done. While it was a surgically sound procedure, morbidity in the form of bleeding was common. A number of measures were undertaken to reduce the amount of bleeding. The prostatic cavity was packed with ribbon gauze, around red rubber urethral catheter (without balloon) and a widebore suprapubic Malecot catheter was left in the urinary bladder for suprapubic drainage. It was common to find most surgical wards emanating a urinary smell due to open suprapubic wounds wetting the bulky suprapubic dressing.

At a later date, Foley indwelling catheters were available although quality of the balloon was very poor and leaks and rupture of the balloon was quite common. Bladder neck ligatures and adjustment of balloon of Foleys catheter into the bladder into the prostatic cavity and circular bladder neck sutures were tried to reduce the bleeding during surgery and post operative period. However, placement of Foley’s balloon inside the bladder and traction, to reduce the bleeding from the bladder neck area was found to be most effective. Post operative irrigation with normal saline reduced the chances of clot retention.

Despite all attempts, mortality due to blood loss and septicaemia was common. It was mandatory to keep two units of blood available in the operation theatre before starting the surgery. Morbidity and prolonged hospital stay (10-14 days) was common. Only basic antibiotics like Ampicillin and Gentamin were available to treat septicaemia.

In the late seventies, Retropubic Millins prostatectomy with angular ligatures of prostatic vascular pedicle was started. It reduced the requirements of blood and no SPC was used. Urethral catheter was removed after 5 days. However, problems of septicaemia continued to haunt. Hospital stay was also reduced to 5 days to 6 days.

During my posting at Pathankot MH, I had an opportunity to use this technique on BPH patients. Results of Millins Prostatectomy(about 100 cases), encouraged me to pursue my career in Urology, and gave me the courage to proceed for MCh. Urology even at an age of 42 years! I joined PGI, Chandigarh in MCh (Urol) in the year 1981.

In subsequent issues, I shall chronicle my journey as a urologist over the last 3 decades.

I joined PGI at the age of 41, and was again a student in the company of three young doctors, 14 to 15 years younger, and was popularly addressed as ‘Father’. This was an era of learning scientific and methodical urological problems and all urological investigations i.e RGU, MCU, Nephrostograms, Urodynamic studies. These were done by us(Senior Residents). We had exposure to all major urological open surgical procedures …. Recurrent kidney stones, hydronephrosis, radical nephrectomies, replacement of ureter by long Boari’s flaps, ileal loop and Psoas hitch etc. Repair of recurrent urethral strictures by transpubic operations was commonly done. Repair of vesicovaginal fistulae, vesico rectal and uretero vaginal fistulae used to be challenging problems.

Endoscopic procedures were limited to OIU, TUR(P) and TUR Bladder tumors. These were usually done by faculty members. Teaching aids for endoscopic surgery were not available at that time, so exposure to endoscopic surgery was limited. On completion of the MCh course( June 1983) we were confident to tackle all urology problems independently. Credit goes to the urology faculty at that time.

The period from 1983 to 1993 ( Stay at Command Hospital (CC) Lucknow and Command Hospital (SC) Pune/AFMC) was the period to achieve excellence in patient management and academics. I spent a lot of time at the Paraplegic ward at Command Hospital (CC) Lucknow and later at the Paraplagic Home in Kirkee, Pune. Working with the paraplegic patients and understanding their problems, helped me explore the new areas in urology management of Paraplegics. We set guidelines to prevent upper tract urological complications and achieve a balanced urinary bladder. There were about 150 paraplegic and tetraplegic patients on indwelling catheters, having recurrent urethral fistula, recurrent UTI, septicemia and dilated upper Tracts. Ultrasound was not available. They were assessed urologically, biochemically and radiologically.

Guidelines for urology management for paraplegic/tetraplegic patients were streamlined.

1) In all paraplegic/Tetraplegic patients, indwelling catheter was replaced by clean Intermitteny self catheterization (CISC) / Assisted Catheterization only by one person (Med. Assistant/Relative). All new patients were put on CISC on the day of injury/admission.

2) During recovery, after 3 months, they were started on bladder training + CISC on the day of injury/admission.

Sexual management in paraplegic patients remained a challenge. Use of Papaverin in standardized doses and sex education regarding positions helped majority of the patients to overcome this problem.

A scientific paper was published in the Journal of Paraplegia with references in Campbell’s Textbook of Urology.

Interesting cases published or presented during this phase were :

We published/presented 67 papers in the various national and international conferences.

The 10 years of stay at Command Hospitals and AFMC was a golden period of life to achieve professional/academic achievements. Sir William Osler said, “we are here to add what we can to life, not get what we can from it”. My work with the patients at the Paraplegic Home in Pune has always remained close to my heart — Even now, patients from Paraplegic Home, Kirkee, reach our centre for their urological problems and are in touch with me on telephone or through New Year cards. My professional achievements and association with Paraplegic and Tetraplegic patients have been the most satisfying period of army career.

Stepping out of the army life and way of working brought forward a whole new set of experiences….and Urology as a science was evolving steadily during the third phase of my career. These changes I shall share with you in the next issue.